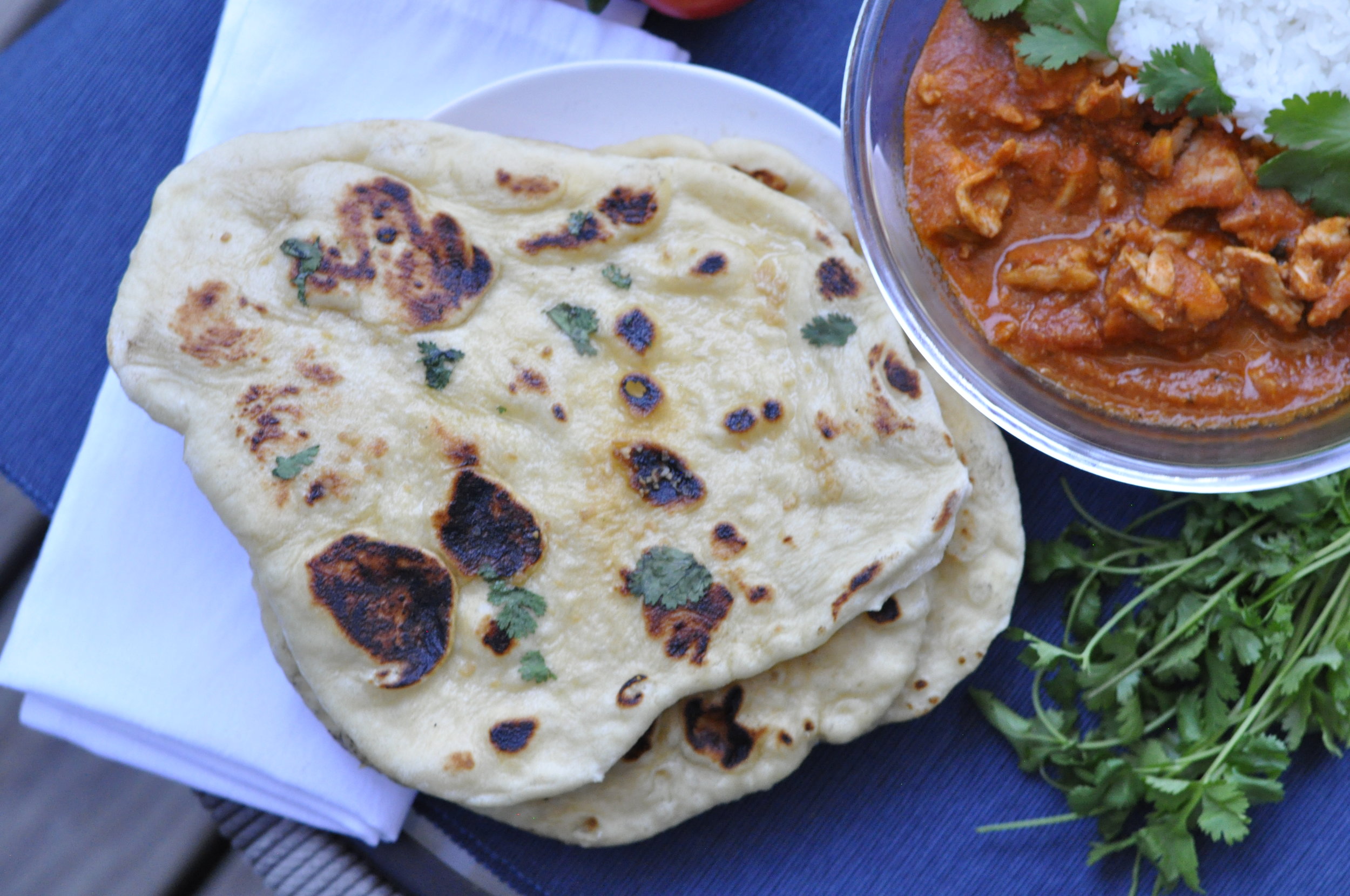 How to Make Naan Bread 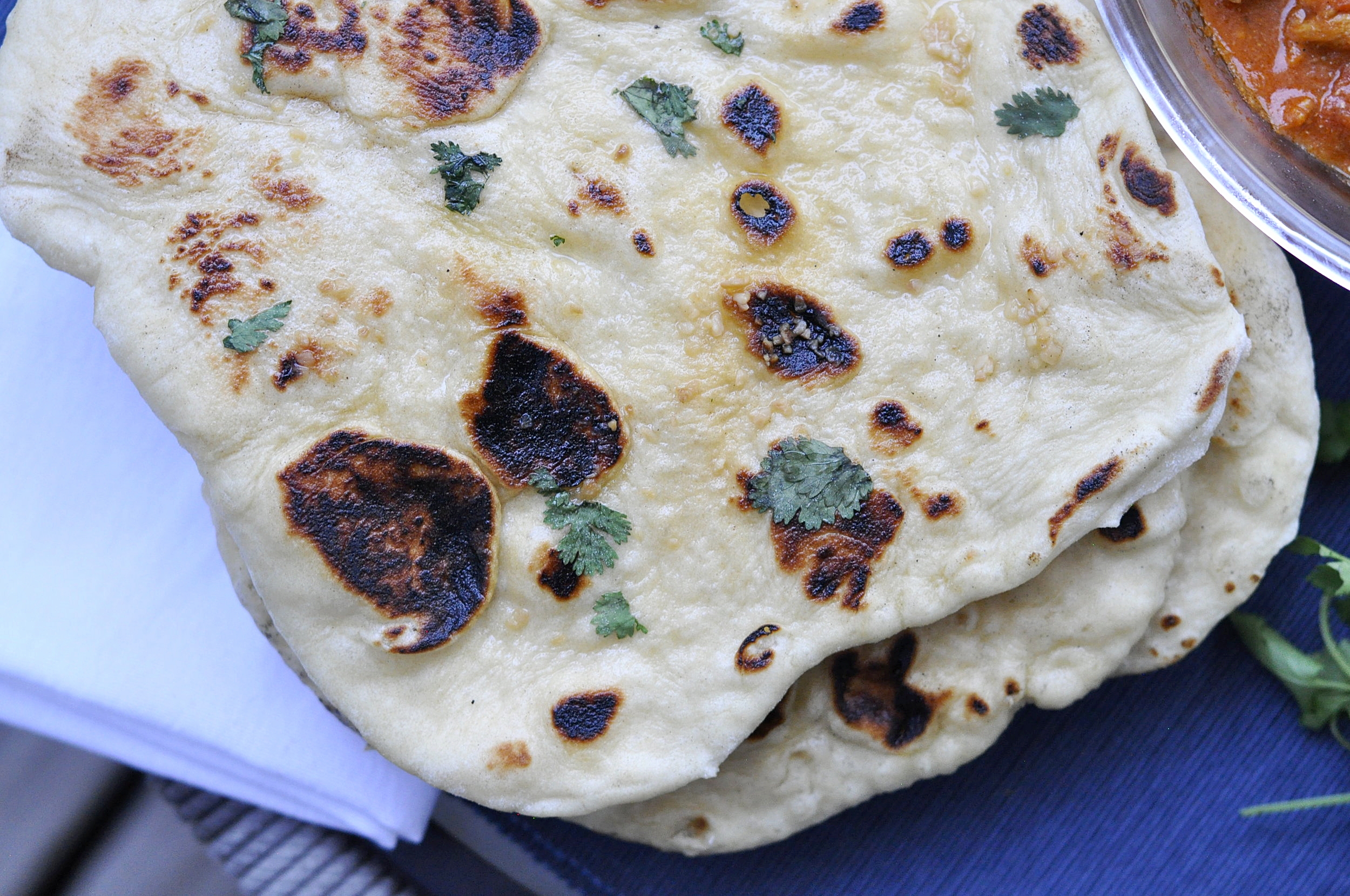 Naan bread, it goes great with all the flavorful Indian dishes: curries, paneer, tandoori, and tikka masala! Let’s be honest, one of the main reasons you love eating Indian food is the naan bread. We made this recipe in partnership with Brummel & Brown Organic Buttery Yogurt Spread. If you decide to make homemade naan bread you might as well check out our tikka masala recipe while you’re at it. We think naan could also be awesome for some homemade flatbread pizzas. This recipe makes 8 pieces of naan bread, so a pizza could be a great way to use up any leftovers (that is if you don’t devour it all fresh out of the frypan)!

For this recipe, we opted to turn regular naan bread to buttery garlic naan. The reason why is because naan bread uses yogurt in the dough and Brummel & Brown buttery spread is made with yogurt too! It’s a perfect complement and is even a more nutritious option compared to using butter. Half the saturated fat vs. butter but still 100% delicious naan! Check out nutrition info here for more info. 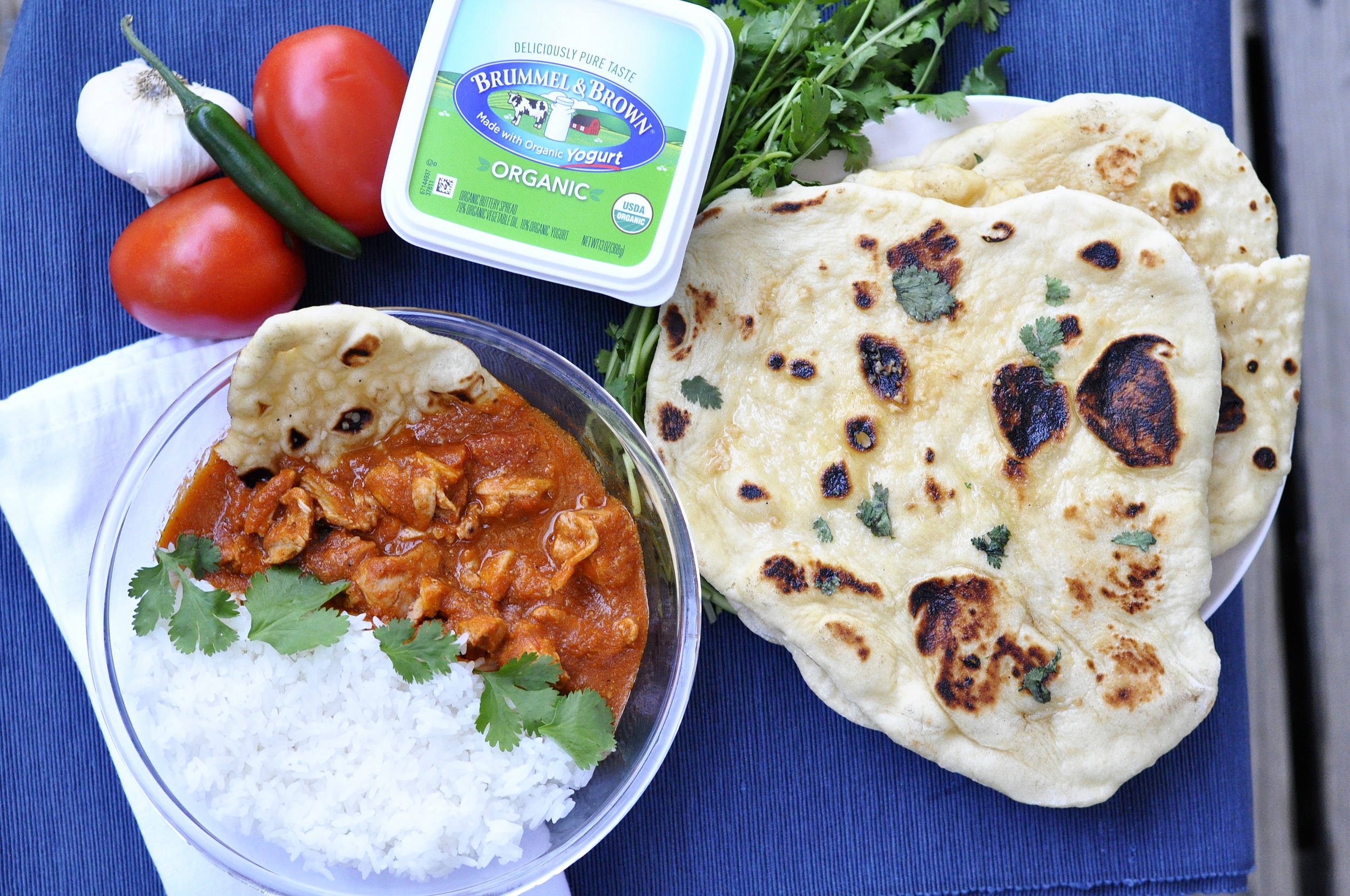 At first, this dish seemed a little intimidating, but we watched a bunch of videos and read a number of recipes in order to figure out the best way to create this naan recipe. It was surprisingly WAY easier to make than expected. (We even excitedly sent a photo to our influencer group text chat after the first naan came out perfectly!) The only thing to keep in mind is that it takes about an hour or so for the dough to rise. If you have a bit of patience, anyone can make this. 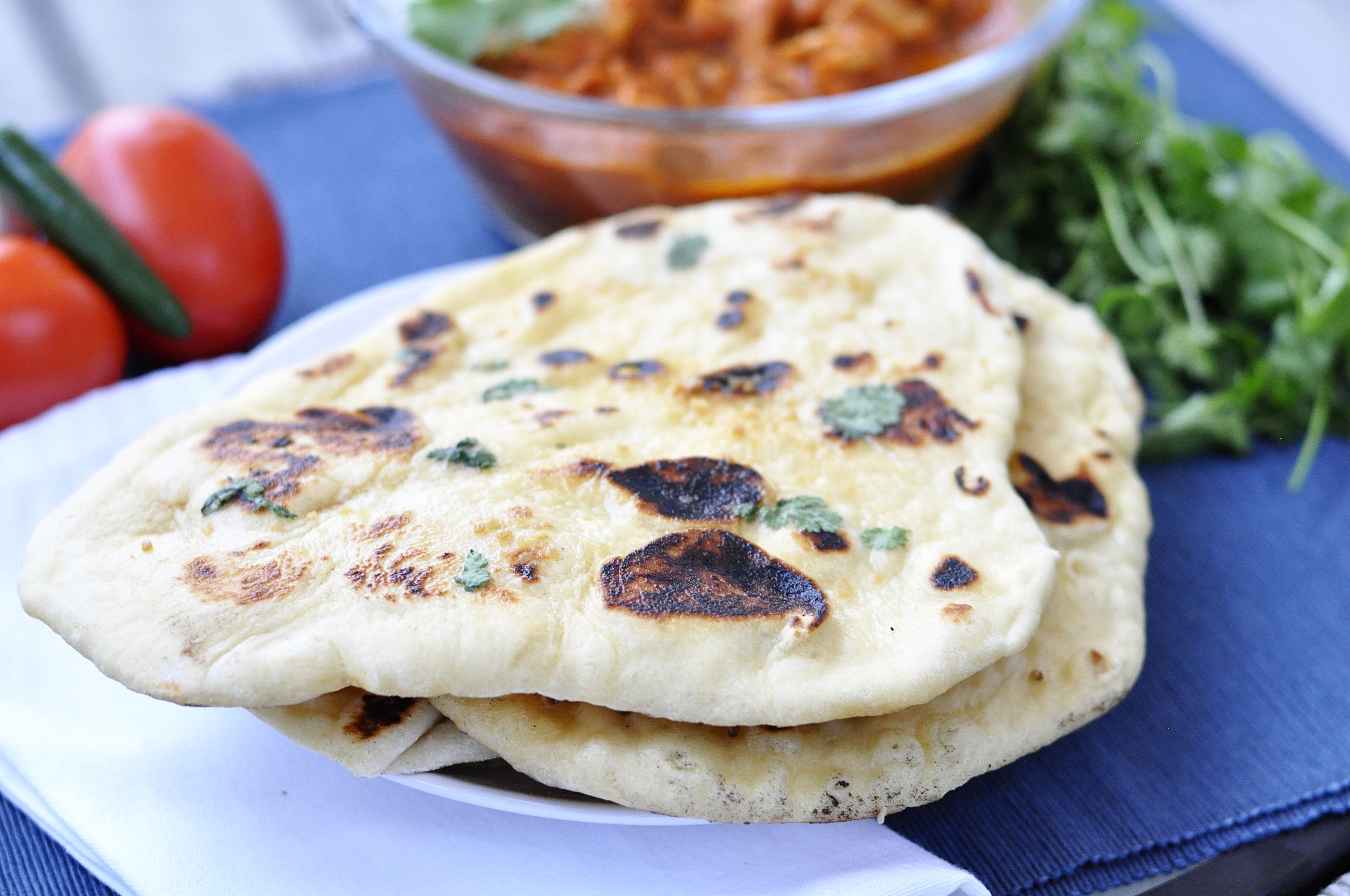 Start by adding the water and honey in the bowl of a stand mixer and stir until the honey has dissolved into the water. Add the packet of yeast and stir the mixture, then allow the yeast to sit for 10 minutes, it will get foamy. Turn the mixer to low, and add the flour, yogurt, salt, baking powder, and egg. Once those start to combine, increase the mixer speed to medium-low, and continue mixing the dough for 2-3 minutes until the dough starts looking smooth and starts to form a ball. The dough is going to be a bit sticky, but that is totally fine.

Pull the dough out of the mixer and form into a ball with your hands. In a separate bowl, add a drizzle of oil to the bowl to lightly coat the bottom and the sides, pop the dough into the bowl and give it a quick turn to coat it lightly in oil. Next, cover the bowl with a damp cloth and place in a warm area to rise for 1 hour. (This was a non-issue because we made this on a 102-degree day!) It is going to double in size.

While the dough is rising, melt the Brummel & Brown Organic Buttery Yogurt Spread in a small pan on your cooktop, add the chopped garlic and stir so that it is infused with the garlic flavor. You will use this to brush the naan just after cooking.

When the dough is ready, move it to a floured cutting board. Cut into 8 equal size pieces and roll each into a ball with your hands. Then roll out each ball of dough on a floured surface using a rolling pin, forming a circle or oval until the dough is a little less than 1/4-inch thick. Initially, we were making these thicker than we needed to, know that they puff up on the pan.

Heat a large sauté pan over medium-high heat, do not add oil. Add one of the rolled-out dough sections to the dry pan and cook, one at a time, for 1 minute, or until the dough begins to bubble on top and the bottom turns light golden brown. Flip the dough with a spatula and cook on the second side for 30-60 seconds, or until the bottom is nicely golden brown as well.

Transfer to a plate and brush naan lightly with the garlic-infused sauce, then sprinkle with a bit of cilantro. You are going to cook these one at a time, but the process goes quickly. Try to keep your cooked naan covered while repeating the process with the remaining balls of dough.

Nothing is better than eating the naan when it is still warm. We recommend making the rest of your meal while the dough is rising. That way, your dinner is ready while the naan is super fresh!

We cannot get over how surprisingly easy this naan was to make! Next stop: roti???

This is definitely a recipe you’re going want to pin and make at home! 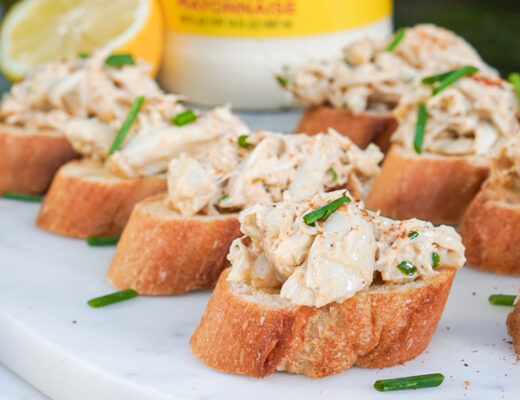 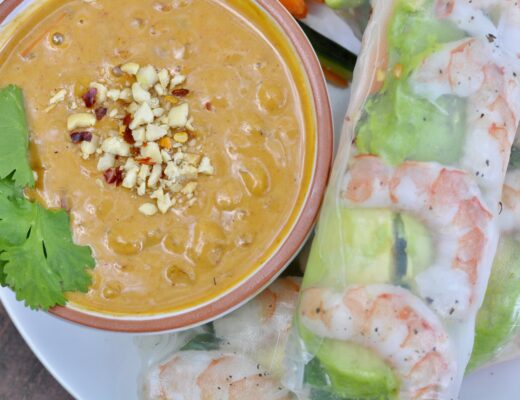 How to Make Spring Rolls at Home 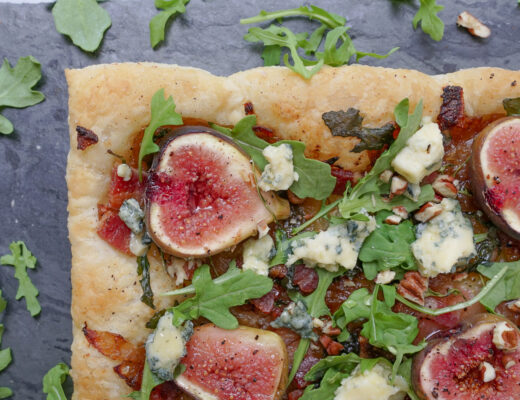