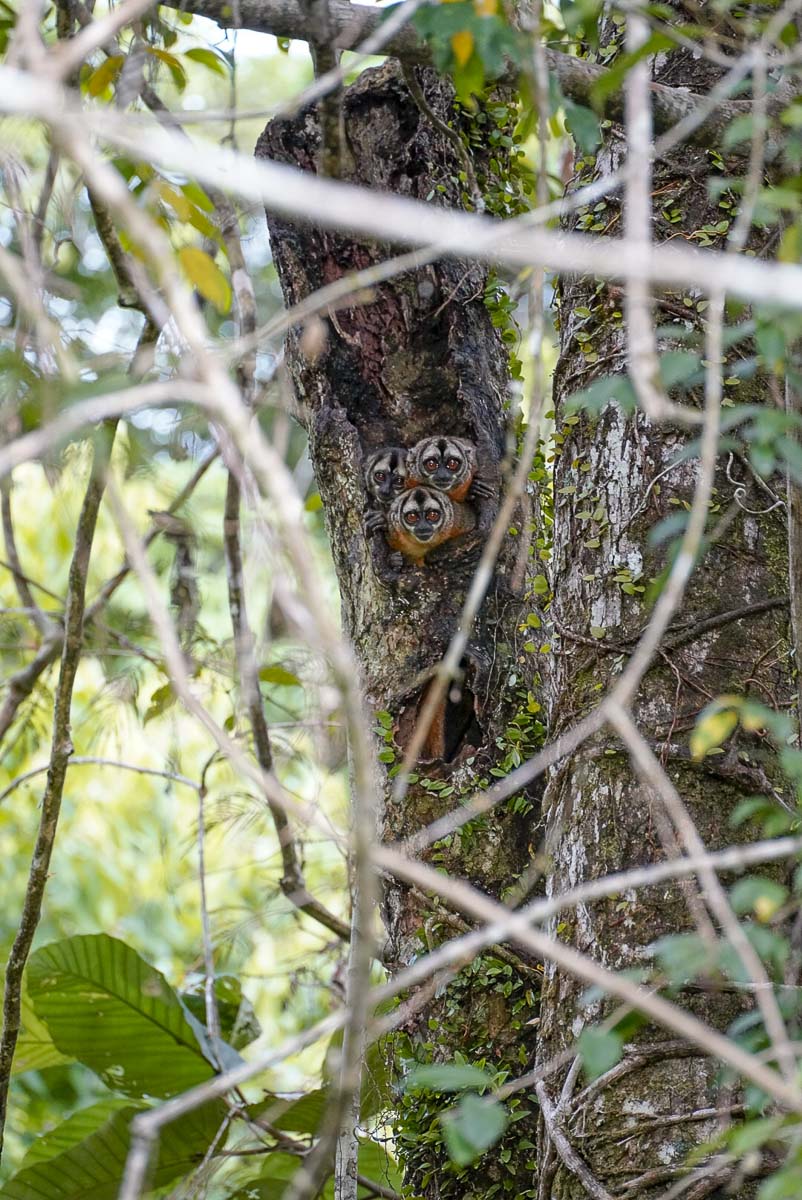 While in Peru, we couldn’t pass up the once-in-a-lifetime opportunity to take an amazon river cruise!

It’s an immersive experience into an ecosystem and a view into a slice of wildlife of exotic animals that most people will never have the chance to see.

What is most magical is all the animals that you’ll see in their natural habitat.

Going on an African safari was one of the most memorable trips we have ever taken, and this luxury Amazon River cruise was very similar, just with different animals in a different environment.

During your Delfin Cruise along the Amazon river, you’ll be able to see lots of exotic wild animals.

Whether you are on a jungle walk, a skiff boat excursion, or even just right from the deck of the Delfin ship.

What animals live in the Amazon River?

Here are some of the favorite animals we spotted while on this unforgettable trip of a lifetime: Pink Dolpins, Sloths, Amazonian Manatee, Monkeys, Macaws, Anacondas, Caimans, Lizards and Iguanas.

When you are on the Amazon, you’ll spot both traditional gray dolphins that you are used to seeing as well as pink dolphins.

Although pink dolpins seem like something out of a fairy tale, we were surprised by how often we found them on our trip to the Amazon.

We spotted some young pink dolphins which almost looked polka-dotted as they were changing from gray to light pink.

Pink dolphins have a much smaller dorsal fin and look closer to a manatee than a bottlenose dolphin.

As a result, they do not jump out of the water as high, which made snapping a good photo very challenging.

We spotted pink dolphins outside of our stateroom on the Delfin ship, while on skiff boats, and even while kayaking!

They are playful and curious animals that enjoy interacting with humans, so don’t be afraid if they come up close for a swim.

As we were paddling our kayaks, some curious pink dolphins came up right beside us. We were worried they were going to flip our vessel over! (Don’t worry, we stayed afloat!)

Sloths are usually seen high in trees doing their thing – sleeping! These gentle creatures are so slow that algae grows on their fur.

They live close to water because they have been found drinking from streams in the Amazon rainforest.

Sloths’ stomachs can also digest leaves which is why they spend all day doing nothing but sleeping!

Sloths work hard for a living – up at night when it’s easier to spot predators, and sleeping during the day.

The sloths that we saw were the common brown-throated three-toed sloth which live in trees close to water sources.

We also spotted another type of sloth hanging from a tree and eating the fruit!

Amazonian manatees are not at all related to sea cows but they have similar coloring with their mottled gray skin.

They also have a large, round body with paddle-like flippers.

Unlike sea cows, Amazonian manatees have no hair and they inhale through their nose rather than blow out the water from their lungs like sea cows do.

The Amazonian Manatee is an endangered animal so we did not see them in the wild on our trip, but were excited to see them at the Amazon Rescue Center.

As part of our Delfin Cruise, a guide brought us to the animal rehab center on the way back to the airport in Iquitos, Peru.

While there are a number of animals at this rescue center, they specialize in Amazonian manatee rehabilitation.

Monkeys in the Amazon

Although we were excited for all the exotic animals in the Amazon, spotting monkeys may have been our favorite!

We were mesmerized when we saw tiny Squirrel Monkeys or Tamarins.

But what we were most excited for was seeing a trio of rare, nocturnal Night Monkeys. It is really rare to be able to see these monkeys during daylight hours.

Not only did we get to see them awake, but a family of three were nestled in a hole of a tree trunk!

It was the most adorable thing we witnessed all trip!

We also departed on a walking tour of the jungle to see Howler Monkeys.

We were told that they are not always easy to spot because they move around in trees and live high up out of sight!

The guides did their best to show us these amazing animals, but we had trouble spotting them as well.

But we could hear them hooting and hollering from the trees as we walked through canopy bridges in the jungle treetop.

The last monkey species that we spotted was the Wooley Monkey.

The Wooley Monkey is the largest primate found in Amazonian rainforests.

They are usually seen sitting on branches or chasing each other through trees, and they come down to lower levels for food like palm fruit.

They also live close to water sources which is why we saw them near our boat as we took a skiff excursion.

We spotted an entire family of Wooley Monkeys!

The younger monkeys were playing and picking on each other, while the adults hung from the trees by their long tails as they picked their lunch off of the tree branches.

We were excited for the opportunity to see beautiful Macaws and exotic birds while in Peru!

The guide was so good at spotting wildlife and being knowledgeable about all the species.

He was pointing out different species of macaw that would fly around above our heads and be able to hear their calls from far away.

Our guide also took us to “parakeet island” a spot along the amazon river where thousands and thousands of bright green parakeets migrated to each night.

It was a wildlife experience unique to anything else we’ve seen.

The wildlife we were most nervous for were the Anacondas and Caimans that inhabit the amazon.

We had heard about these animals from back home, but it wasn’t until we saw them in person that it calmed our nerves.

It’s hard to tell which is more terrifying – they are both huge and can be found in nearly every body of water in the Amazon.

Our guide took us to a spot specifically to look for Anacondas.

The area looked like a field at the top of the water was covered in lush, green, “sea lettuce”.

This was prime anaconda territory as the famous snake likes to sun themselves on the top of the water while resting on the sea lettuce.

Our heart was racing as our small, shallow skiff boat pushed through the water vegetation as we searched for this massive snake.

Alas, we ended up spotting a baby anaconda sleeping right next to our boat.

Our jaws dropped as our guide reached into the water to pick it up so that we could get a closer look, but the anaconda was too fast and quickly slithered into the water.

While on the Amazon River, you will find caimans, a relative of the crocodile and the alligator.

We searched for Caimans while on a night skiff excursion. We were floored by how talented our guide was at spotting these animals.

It was dark and the rainforest was lush. Armed with nothing but a red light, our guide shined the light in order to catch a reflection of the Caiman’s beady eyes from afar.

We were able to spot both Black Caimans as well as the Spectacled Caiman.

Our guide was able to reach into the water and pull out a small Caiman in order for us to get an up-close-and-personal look at the animal.

Piranhas are dark, small but ferocious animals with razor sharp teeth to match.

We were told that piranha’s seem a lot more dangerous than they are.

We got up close and personal with this fish when we went on our piranha fishing excursion with Delfin.

Watch out for those teeth!

We also spotted lots of lizards while we were exploring Peru’s Amazon jungle. While on the Delfin cruise, we stayed at the Iguana Suite, and an Iguana snuck onto our balcony!

We thought this was a joke, that they crew was playing a joke on us, but in reality, this lizard just wanted to move into our luxury accommodations!

We caught him sitting on the chairs of our balcony and he tagged along for three whole days.

These were some of our favorite animal sighting while on our luxury amazon cruise and Gavin took some incredible photos of the wildlife.

What are your favorites? Comment below with some of them that you’ve seen in the wild. 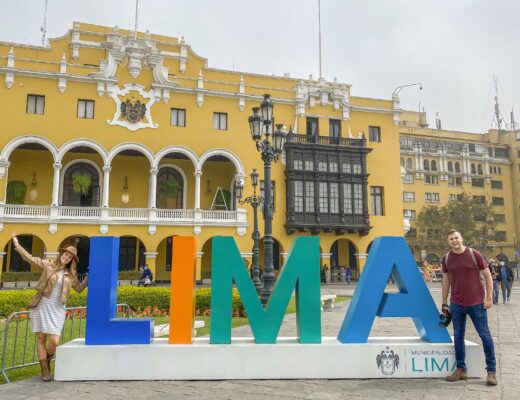 The Best Restaurants in Lima, Peru 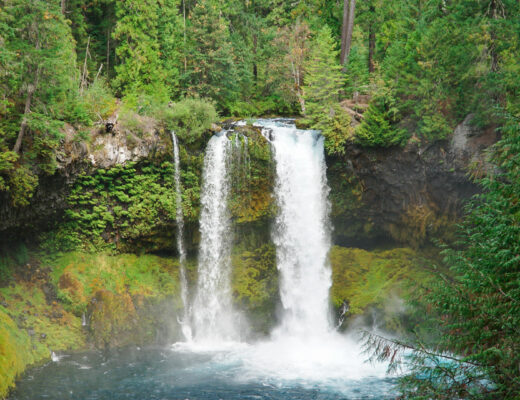 9 Amazing Things to do in Willamette Valley (Other than Wineries) 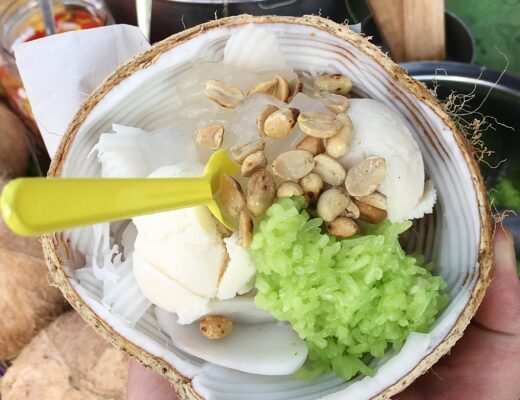 Bangkok, Thailand – A Foodie Guide to the City